The Burns Archive on The Web

THE HISTORY OF POSTMORTEM PHOTOGRAPHY FROM THE BURNS COLLECTION AND ARCHIVE
ILLUSTRATED LECTURE AND BOOK SIGNING WITH STANLEY B. BURNS, MD

Below are a few more of the hundreds of images that will be discussed: 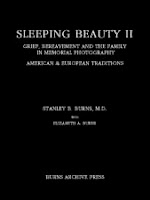 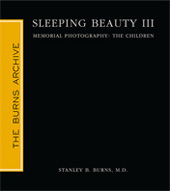 About Sleeping Beauty: Dr. Burns’ first book on postmortem photography, Sleeping Beauty: Memorial Photography in America (1990) has been widely recognized as one of the most important photography books of all time. Sleeping Beauty has influenced an eclectic array of fields, from bereavement counseling and education to cultural anthropology, history, medicine, philosophy, religion and spirituality (not to mention pop music) and has been cited in debates on the death penalty, euthanasia and abortion. It has been the subject of numerous scholarly papers as well as seminars and exhibitions at notable institutions such as the Metropolitan Museum of Art and The New Museum of Contemporary Art. A decade later the Archive published Sleeping Beauty II: Grief, Bereavement & The Family in Memorial Photography American & European Traditions in conjunction with an exhibit at the Musée d’Orsay. Sleeping Beauty III Memorial Photography: The Children, the third installment in this series was released this year to accompany a traveling exhibition.
Posted by The Burns Archive 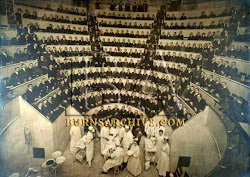 From the birth of photography through the atomic age, The Burns Archive with over one million historic photographs is best known for providing photographic evidence of forgotten, unseen and disquieting aspects of history. The cornerstone of The Burns Archive is its unparalleled collection of early medical photography, but it is also renowned for its iconic images depicting the darker side of life: Death, Disease, Disaster, Mayhem, Crime, Racism, Revolution and War. The Burns Archive has published dozens of books and curated and contributed to frequent national and international museum and gallery exhibitions. Over the past forty years, thousands of publishers, exhibitors, authors, researchers, artists and filmmakers have utilized The Archive and its unique source of visual documentation. The Archive proves that with the right photographic evidence, history has infinite stories to tell.